Dan Wessel was still wearing his Santa Claus outfit when the school nurse began performing cardiopulmonary resuscitation on him.

A student already had called 9-1-1. Another student grabbed the automated external defibrillator and brought it to the nurse.

Their textbook response saved Dan’s life. Again. Just six months earlier, Dan had his first cardiac arrest, and a fireman, police officer and a bus driver – all trained in CPR – happened to be there. 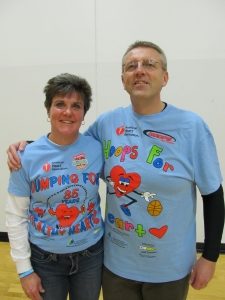 Dan is able to celebrate this holiday season with his family and friends in Osakis, Minnesota, thanks in part to the American Heart Association.

The AHA helped pioneer CPR over 50 years ago, and continues to refine this lifesaving technique. The organization trains more than 15 million people each year across the United States and in 60-plus countries. Even without formal training, anyone can be a lifesaver by remembering the steps to “Hands-Only CPR” – call 9-1-1, then push hard and fast in the center of the chest, preferably to the beat of the classic disco song, “Stayin’ Alive” until help arrives.

The AHA also supports research, like those that have led to innovative procedures that also have extended Dan’s life – such as the triple bypass he needed after his first cardiac arrest, and the implantable defibrillator he received after his second attack.

Dan’s wife Kirsten has long been a supporter, spearheading Jump Rope For Heart events at her local schools the last 12 years. This holiday season, the Wessels encourage your support of the American Heart Association.