Raleigh has scored another “best of” accolade ranking fifth among 25 other major U.S. metro areas as a top place to live and work. Yes, our Triangle city is the real deal. 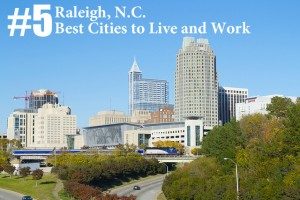 In a recent Career City Index report released by talent recruitment firm Robert Half, Raleigh earned points for a good cost of living and quality of life as well as its career prospects and close proximity to the flourishing Research Triangle Park tech hub. Other data categories in which Raleigh ranked high included a lower prevalence of violent crime and projected population growth.

According to the Career City Index report, “Companies are taking advantage of the city’s educated workforce (47.8 percent of the population over age 25 holds a bachelor’s degree or higher) and pool of new university graduates. … It also has well-developed financial services and insurance markets.”

The overall rankings for the Career City Index report include:

In individual categories, of which there were 25, the City of Oaks’ most notable rankings were:
– #5 Quality of Life
– #6 Cultural Diversity
– #8 Cost of Living
– #14 Career Prospects